The Economic Forum of the Mediterranean, which was held in Rome on February 26-27, 2010, was organized by Confindustria, ICE and ABI, in collaboration with the Ministry of Economic Development and the Ministry of Foreign Affairs, with the assistance of the City and of ‘Union of Industrialists and business in Rome.

The event, which was held next the Campidoglio, was an opportunity to compare the systems of small and medium-sized enterprises and industrial co-operation in the Mediterranean, due to the intervention of the presidents of industry associations in 13 countries of the southern Mediterranean Morocco, Algeria, Tunisia, Libya, Egypt, Israel, Syria, Jordan, the Palestinian Territories, Lebanon, Turkey, Cyprus and Malta, as well as representatives of institutional and private national and foreign. 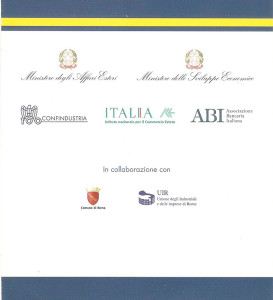